Be welcome on the opening of Europalia's exhibition 'Power & Other Things, Indonesia & Art 1835–Now' this tuesday 17.10 at 18.30. This exhibition explores the recent and often turbulent history of Indonesia, seen through the works of 21 Indonesian and Western artists. The Dutch colonialist period and Japanese occupation, the status of women and immigration are among the themes this exhibition tackles in order to understand contemporary Indonesia.

Curated by Riksa Afiaty and Charles Essche. Read more about it here.
Graphic design and scenography design by Bureau Grusenmeyer. 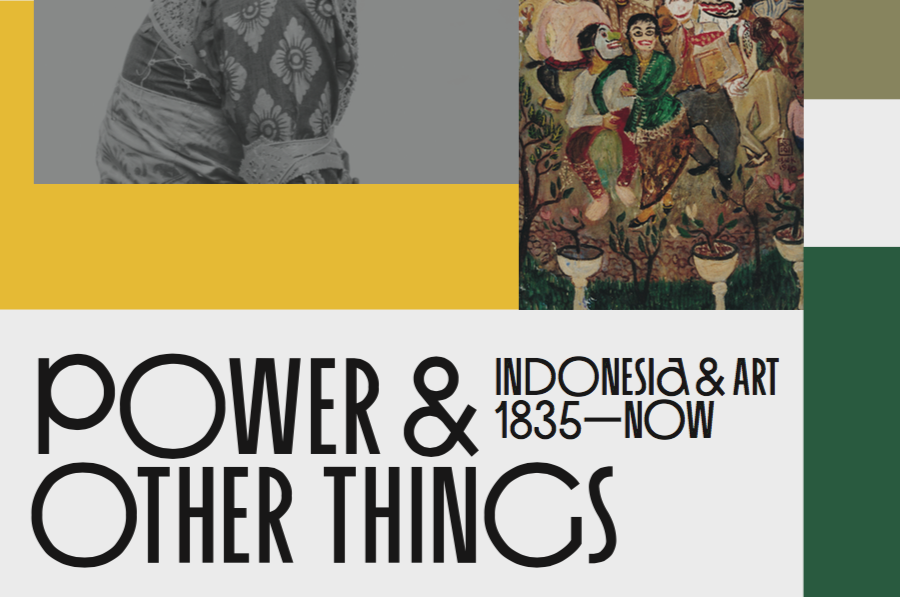 Bureau Grusenmeyer is invited to speak on the next edition of the biannual design conference Integrated. Mark 14 and 15 November in your agenda to be part of this two day design immergence!

The biennial event offers a platform for the compelling dialogue between art, design and society, and digs deep in the polemics of this discourse. The 2017 edition focuses on the art & design of the civil domain, an ambiguous third space between market and state, where innovative design ideas, both physical and virtual, are more than often incubated in a grey zone between legality and illegality.

Read more about the conference here and get your tickets here. 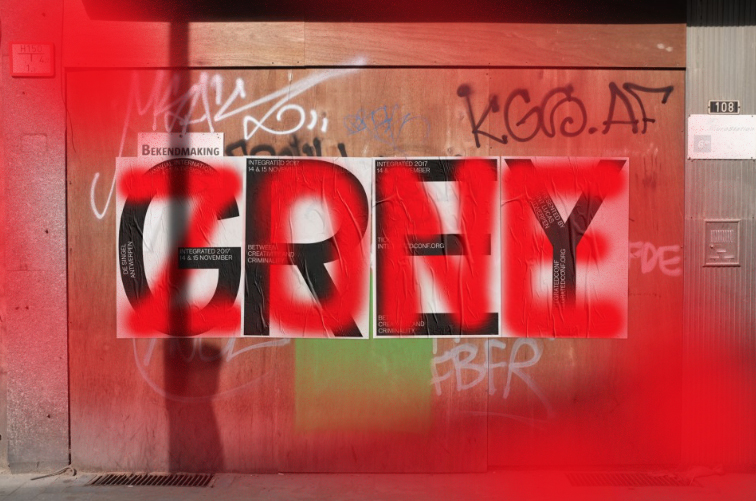 End to End at MSK, Ghent

On the 14th of May Performing Objects will hold a session of End to End at MSK, Ghent as part of the finissage of 'Objections'. From 2PM to 6PM the installation will be activated.

End to End is a working method that structures a group process in which objects are continuously transformed. This collective work process takes place in silence. Front and afterwards the proces is evaluated in group. Objects from the museum's backstage will be the medium of this performance, executed by 8 performers. Come and see what meaning the museum objects get in this collaboration!

Organically developped through workshops organised by the artist collective Performing Objects (founded by Marjolijn Dijkman and Kristof Van Gestel) End to End consists of a base score from which multiple projects are now being set up (China (Fei Contemporary Art Center, Shanghai, 2015), Madagascar (CRAAM, Antananarivo, 2016), Raversijde (Private Tag, Raversijde 2016), Ghent (Objections, MSK Gent, 2017)). For this iteration of End to End the performance will be set up with objects from the MSK itself. That is to say - objects from the backstage of the museum or the museum infrastructure. This session will be led by Lauren Grusenmeyer and Ann Dekeersmaecker and executed by members of Performing Objects and Cinemamaximiliaan. 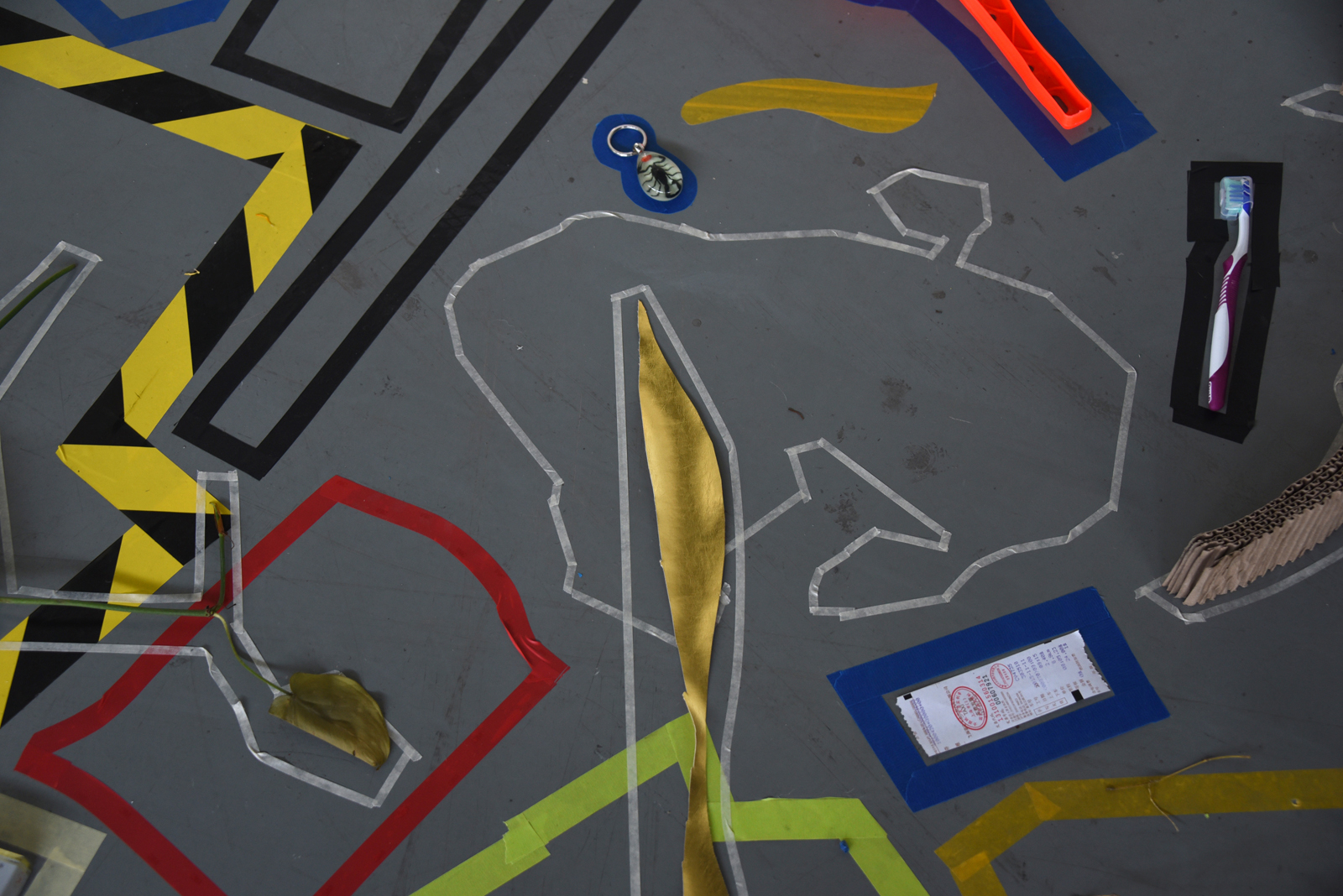 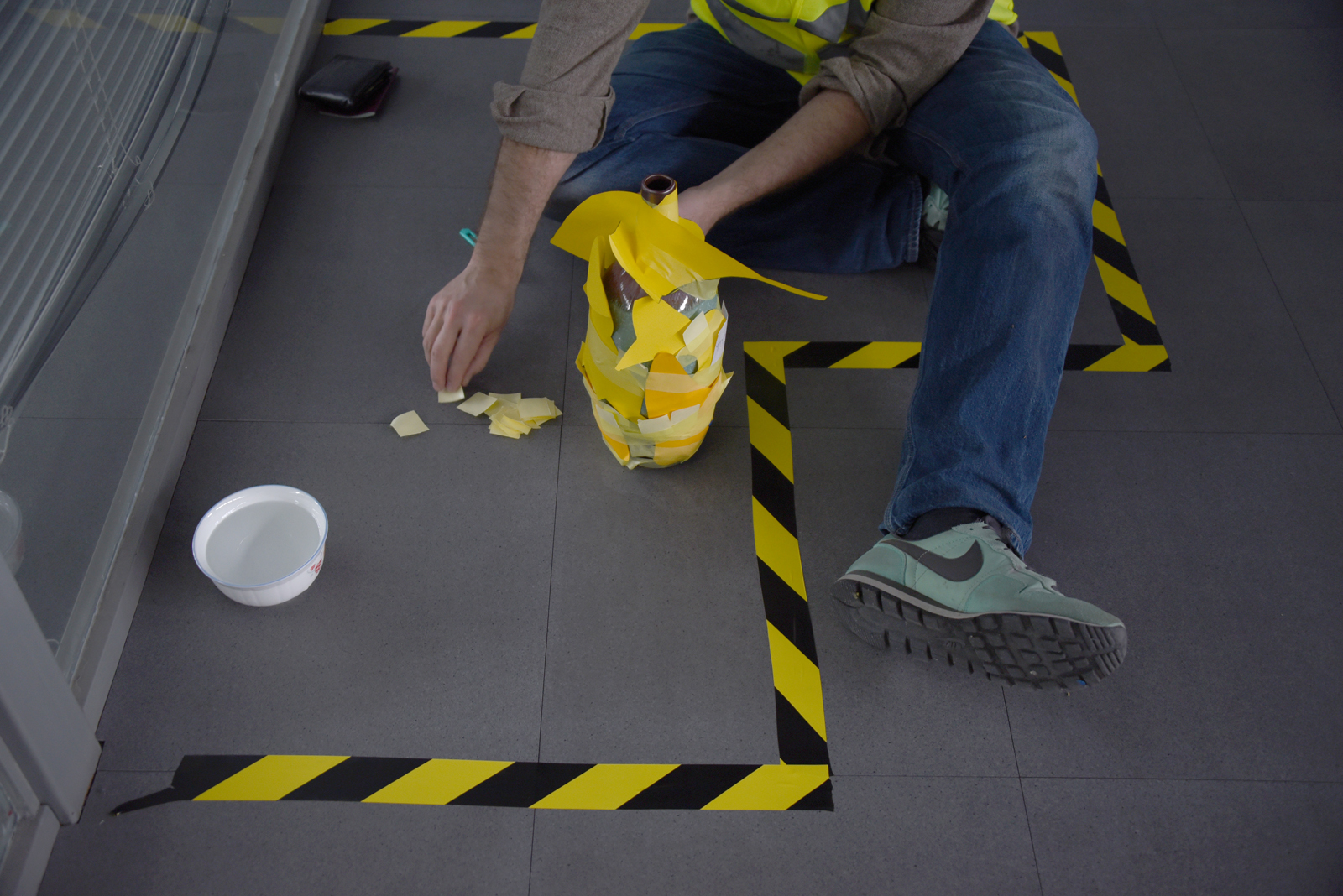 Workout Workshop: The Mind Is a Muscle

As part of the research project Workout, Femke Ghyselinck - dancer, choreographer and artistic assistent of Anne Teresa de Keersmaecker - was invited to test out her ideas on scores and instruction based dance with students of Sint Lucas Antwerpen. During a whole week students were physically trained in the morning. In the afternoon a series of scores based on the ideas of the 'No Manifesto' by Yvonne Rainer were tested out. Parts of these scores were then assembled into one choreography which was performed at the end of the week at Extracity, Antwerp. Many thanks to the students for the intense workouts and Extracity for the great collaboration! 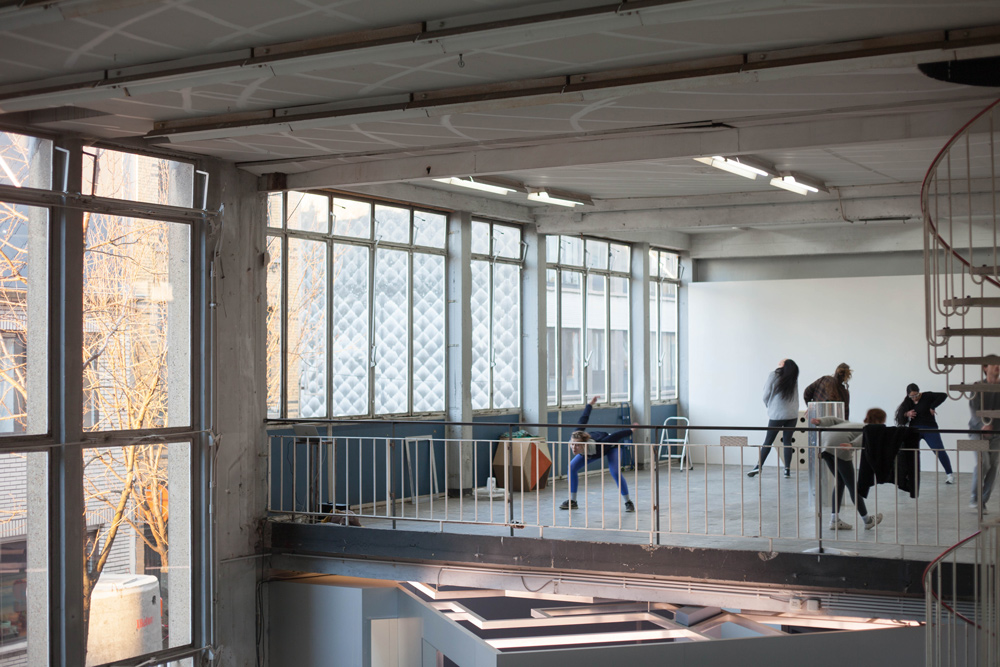 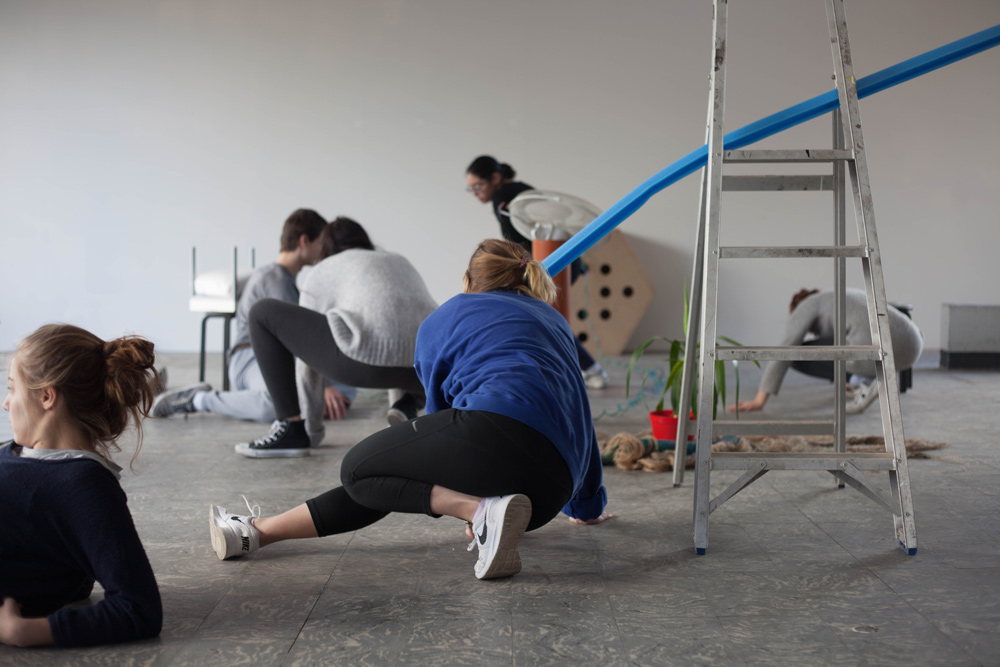 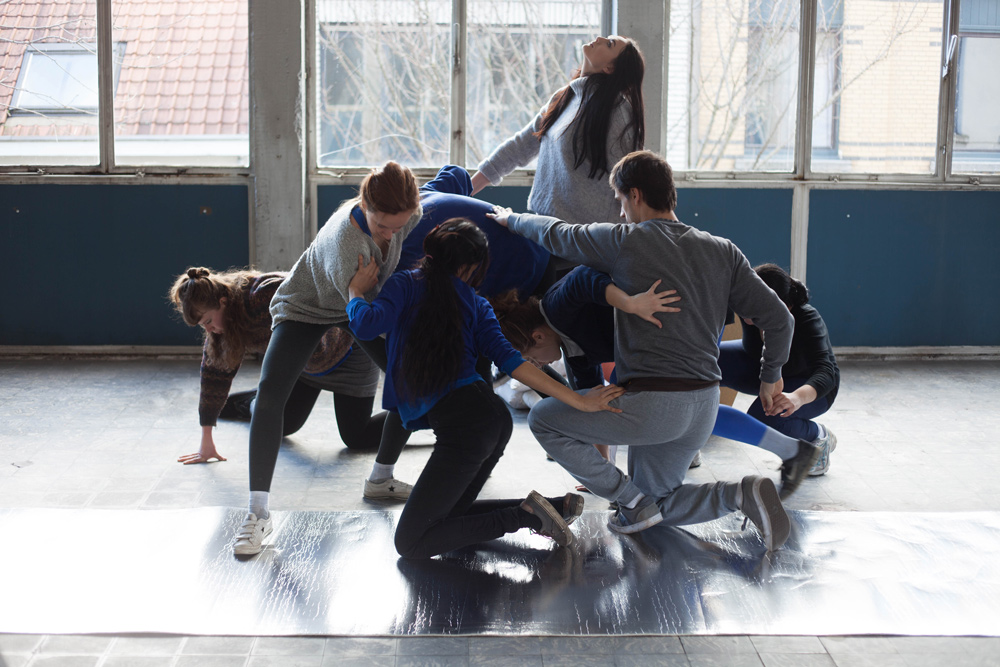 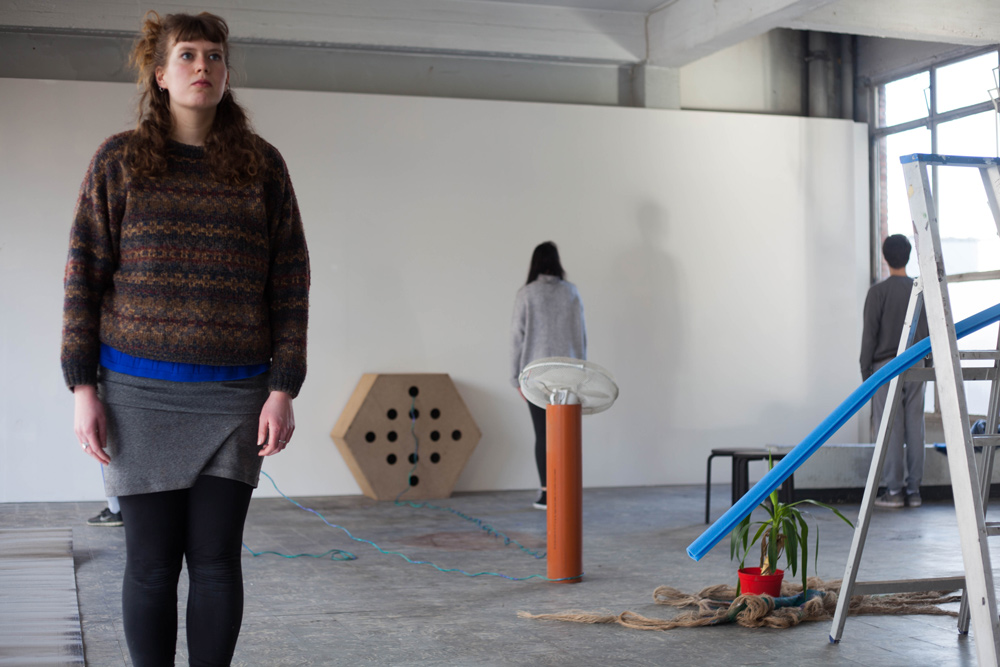 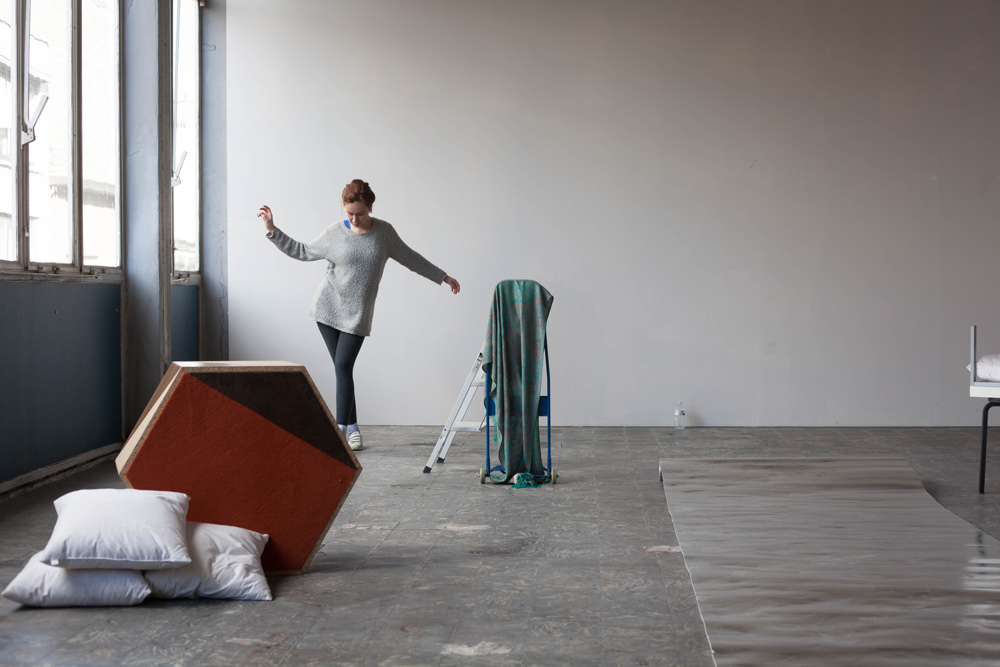 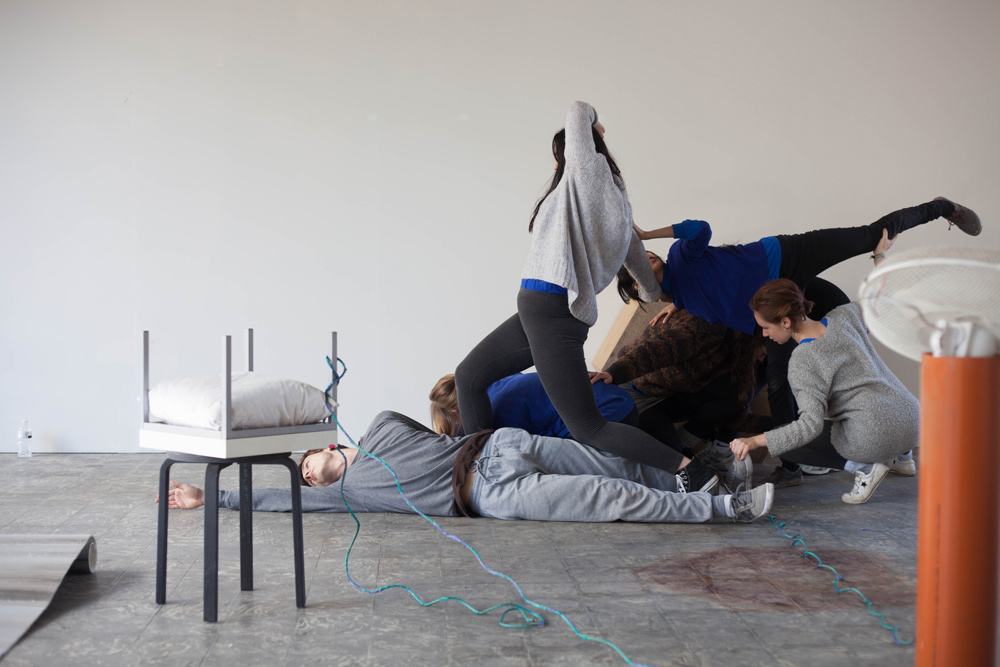 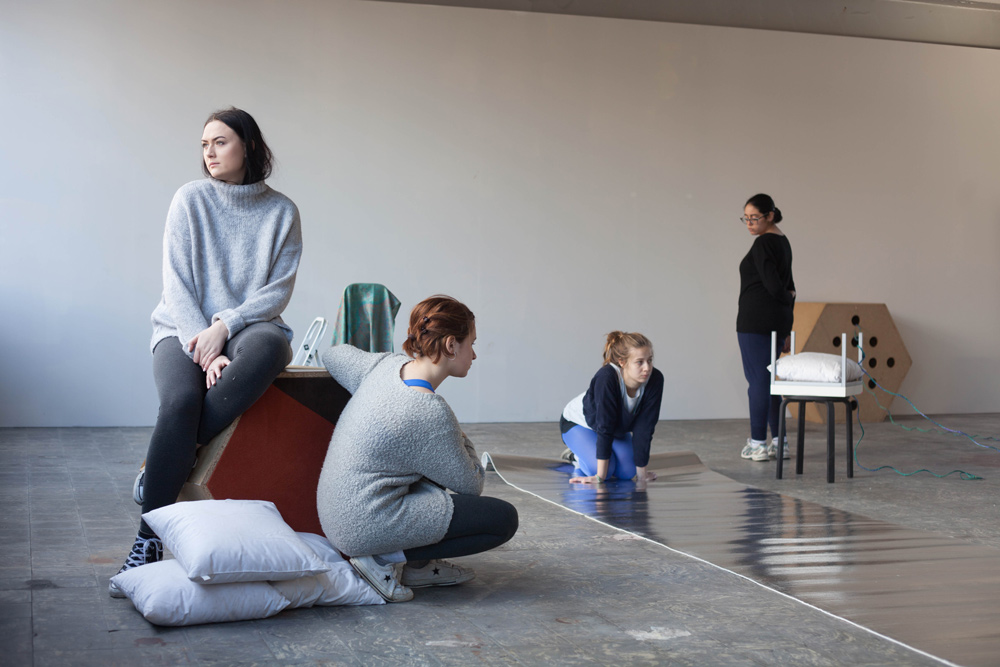 Collage work has always been an important part of my practice. Somehow, if I start cutting up existing designs or illustrations, they come to live even more. That's why from time to time I deliberately experiment with cutting up existing material. Experiment is an important part of the studio's practice and that is why I consciously set time aside to engage in this. This time I got lucky and I made some sketches that really inspired me. The result can be seen on a poster I did for the Nrmal festival in Mexico! Out soon! 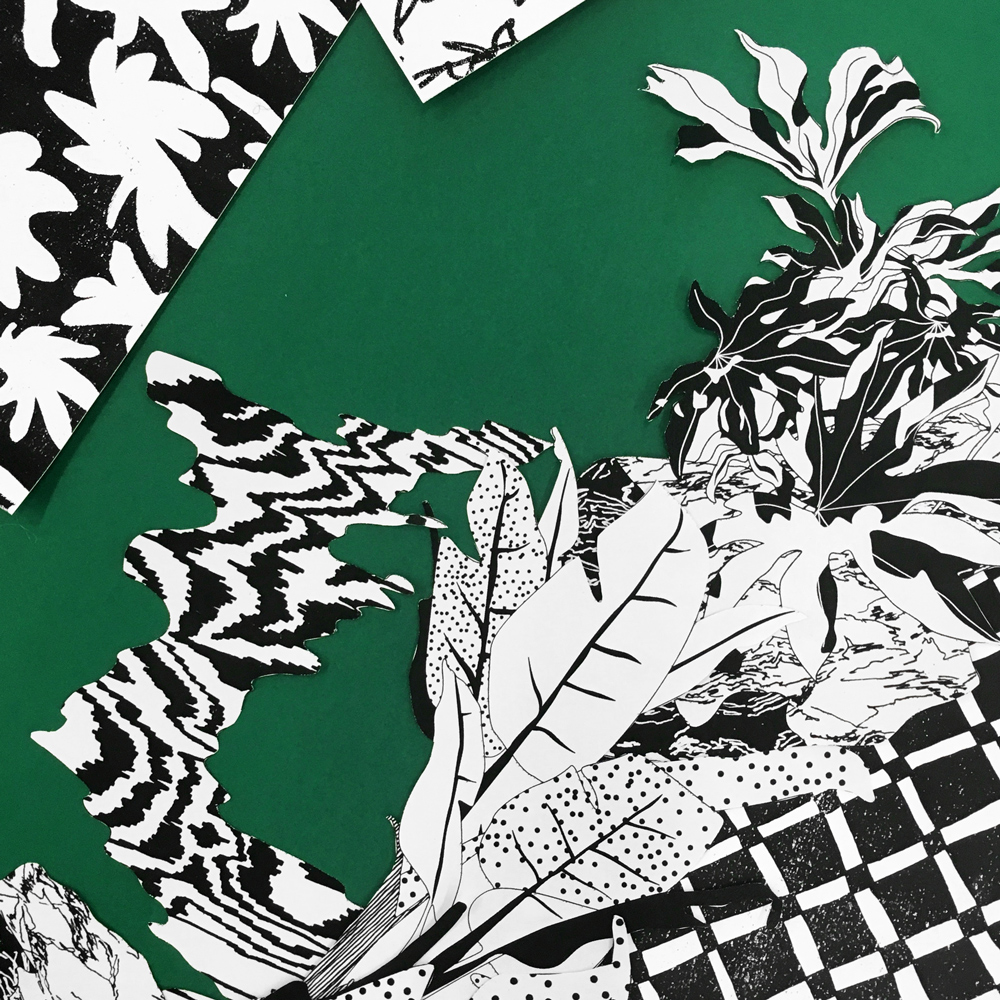 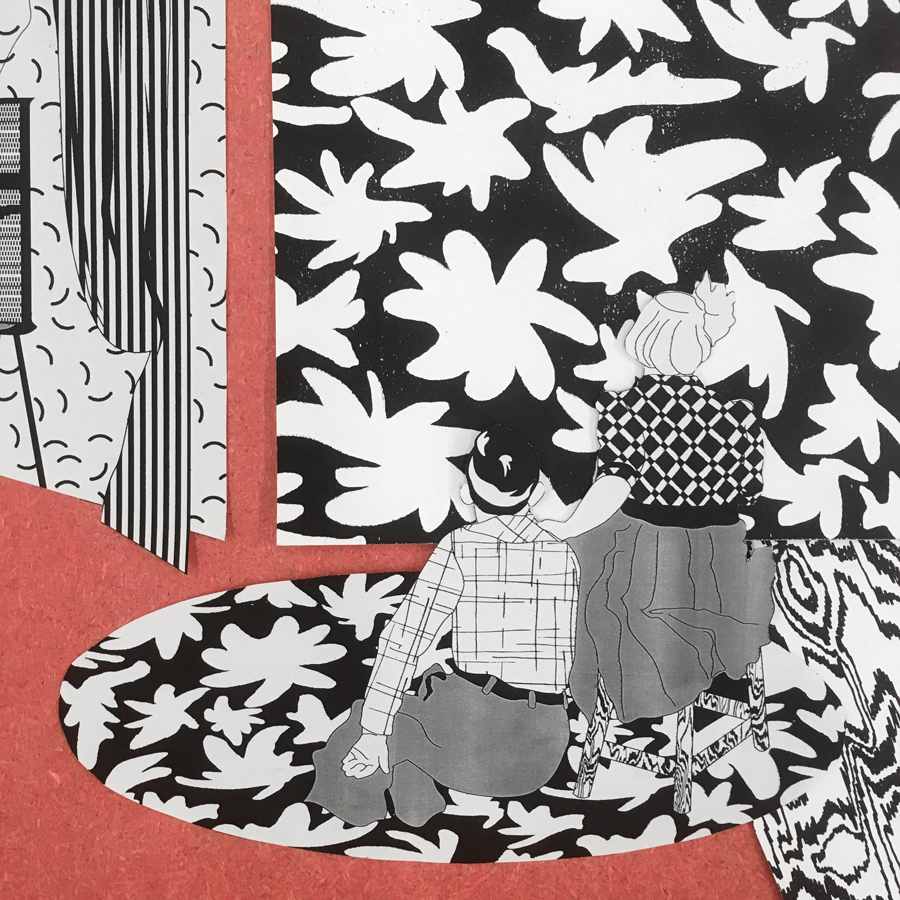 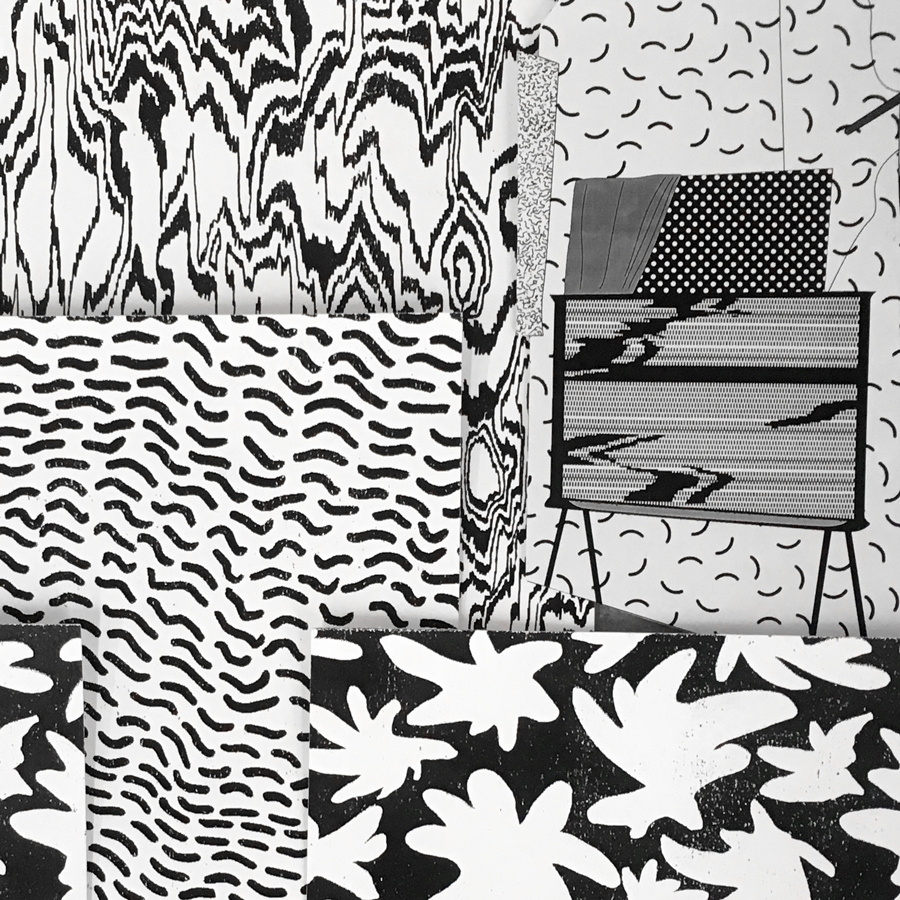 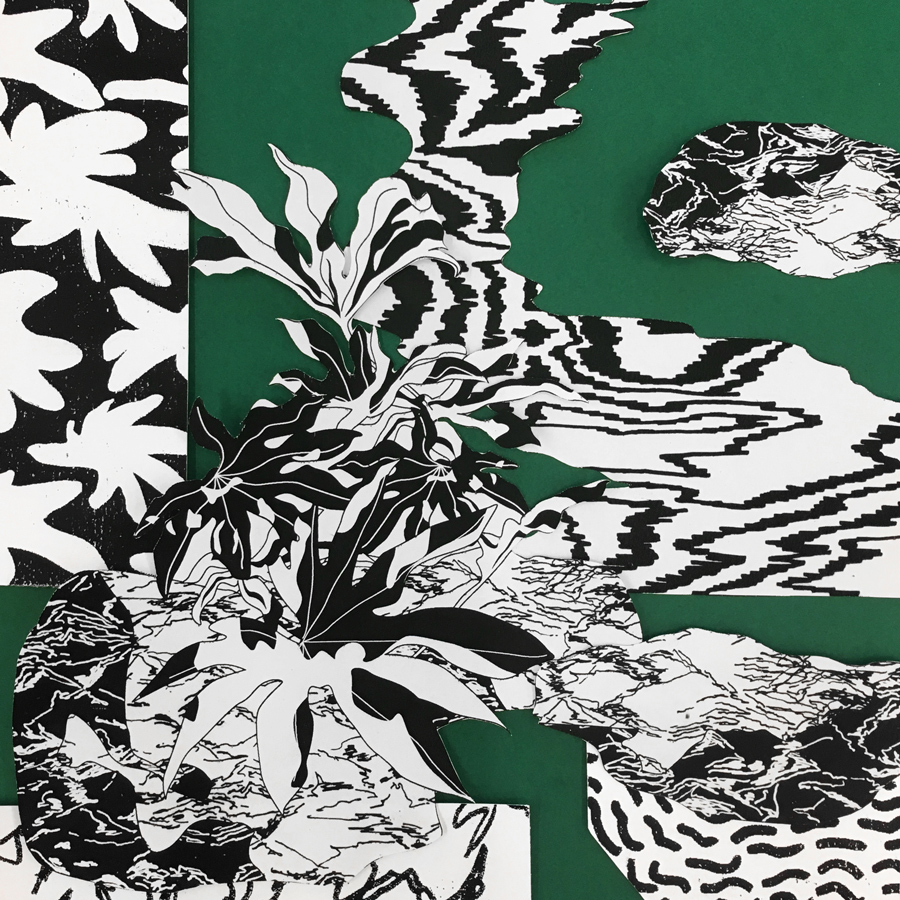 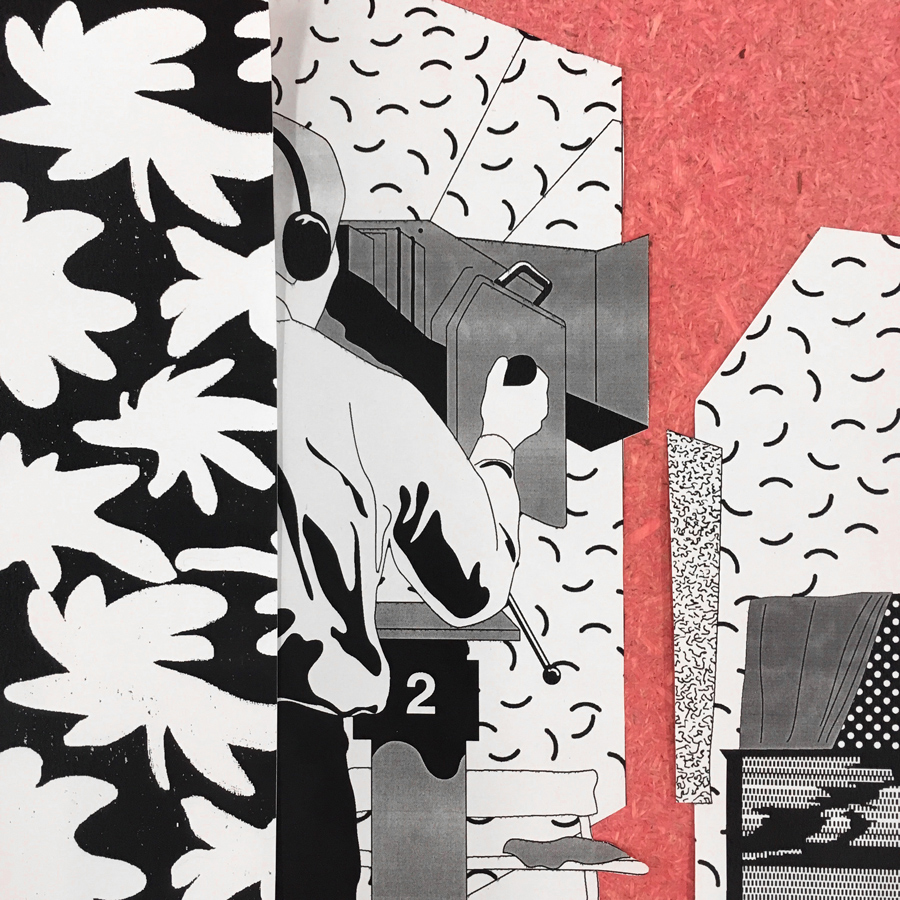 This publication gathers the 2 months long active installation set up at Raversijde by Performing Objects. Every saturday the installation was activated by a group of 4 performers. This whole proces was documented by photograph and is now assembled in a publication!

Booklaunch 18 March from 7PM–10PM at the project space of Enough Room for Space, Brussels.Or get your copy soon in the bookstore!